My name is Debbie Wagenbach, and I write for kids. Why? Because I believe good books are as essential to kid's minds as healthy food is to their bodies.

As the oldest of nine (with seven younger brothers), I had advanced training in many occupations. By the time I was twelve, I was a mom, teacher, cook, gardener, nurse, seamstress, laundry sorter, storyteller, hair stylist, and whatever else Mom needed me to be for the day. I think the biggest advantage I had over other kids my age was that I grew up without a television. Without a television, I learned to use my imagination. I still use my imagination every day when I read, play, and write stories. I love being a Youth Services Librarian, Storyteller, and Children's Book Writer. Most of all, I love being an aunt! I adore my 36 "niblings" (nieces & nephews) and 8 "great-niblings."

Remember to smile every day. It keeps the grouchies far away! 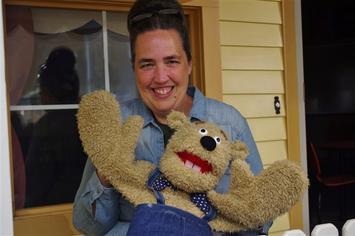 I grew up on a farm, and I still live there today.  My father worked hard as a farmer and county road worker to provide for our family.  My mother was a keeper at home where there were new babies to love and diapers to change for a span of more than 15 years.  The money my parents earned was spent to feed and clothe a large family, so buying books was never high on their priority list.  With only one car, trips to the library were out of the question, too.  What we did have was a Dad and Mom who read us Bible stories, recited nursery rhymes, retold fairy tales and fables, sang to us, and played fun bedtime games that most often got us more wound up than sleepy.    Many evenings, we'd put on our pajamas and gather around the piano.  Mom would play hymns and we would sing like the neighbors down the road had requested a concert.  It was a simple life--no television, no cell phones, no computers, no social media, no air conditioning (we did have indoor toilets).  Today, I look back and know my life is much richer and fuller because I had parents who taught me good things happen to those who put God first, love their neighbors as themselves, and work diligently to achieve their dreams.

My first attempts at storytelling happened in front of this audience.  They were always painfully honest with their reviews and still are today. 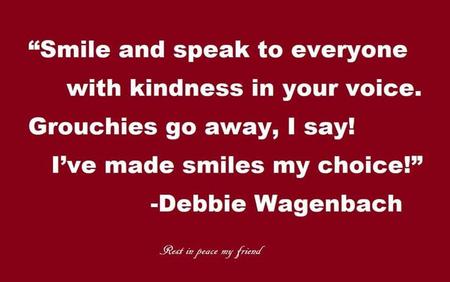 My Bothers as I called them! (Little Brothers)

Debbie's Theme Song  for her StoryTimes!

Debbie Wagenbach, author of “The Grouchies” and “Big, Brave, Bold Sergio,” died late Tuesday after a battle with cancer. She was 57.

Wagenbach was known by generations of Burlington residents as Miss Debbie from her many years spent leading story time at the Burlington Public Library, where she worked for 27 years before retiring in August 2016.

“Miss Debbie made the children in her story times feel special,” said Burlington Public Library Director Rhonda Frevert, who worked with Wagenbach for 15 years. “She had an amazing ability to remember names, even years later. She was welcoming to all and enjoyed meeting new families.”

Wagenbach had a passion for getting children excited about reading. Frevert, whose own children would frequent the library to hear Wagenbach read, said Wagenbach was always looking for new songs to incorporate into her story time. She also would incorporate puppets and felt-board characters into her story telling, and a bubble machine she brought to the library remains a favorite among young patrons.

“She didn’t just do the same story time over and over. She was always coming up with new ideas,” Frevert said.

Wagenbach had been reading books written by others to children for some time when she began writing her own children’s books. It was in 2005 that she asked local children’s book author Sandra Levins to read some books she had written. Among them was “The Grouchies,” a book that teaches children how to cope when they’re having a bad day.

Levins recognized Wagenbach’s potential immediately. Wagebach had always had a knack for rhyming, perhaps encouraged by her parents, who had asked her to make up poems for family and friends when she was a child. It was a skill that showed in her writing. Though she didn’t have any children of her own, she was the oldest of eight siblings, which instilled her with a sense of parental duty and helped her story telling abilities take shape.

“Her talent was amazing,” Levins said. “She very often wrote in rhyme but could write just as well in prose. It didn’t matter. She was just very talented.”

And so, Levins introduced Wagenbach to her publisher, Magination Press, children’s division of the American Psychological Association, and “The Grouchies” was published about a year later.

“It was a charming story,” Levins said. “It was delightfully written, and I could just imagine the illustrations to go with it. It was just a sweet upbeat story for little kids about how to turn our grouchies around and have a better day.”

The book was a best-seller at B. Dalton, where Chris Murphy worked before opening Burlington By the Book in August 2010. Wagenbach and Levins supported the downtown store’s grand opening with book signings.

Wagenbach would continue to do appearances and story times at Murphy’s shop on special occasions, and each time she drew a big crowd.

“Any time Debbie was signing with us, she brought in people, people who just wanted to say hi to her even, because they missed her when she retired from the library,” Murphy said.

Wagenbach continued to write, and another of her books, “Big, Brave, Bold Sergio,” was published in 2018. The story is about a snapping turtle that puts a stop to bullying when he realizes he and his group of friends had been mistreating other residents of the pond he lived in. Despite battling cancer, Wagenbach turned up at Burlington By the Book last year for a book signing and to deliver an enthusiastic reading of the book to her young fans.

“The line was out the door,” Frevert said of the signing, which she attended.

Levins said that kind of attendance was not atypical for something Wagenbach attended.

“I used to tease her that she was famous, because we would go to some event here locally and the kids would just turn out in droves, and I said you know they’re not here to see me right? They’re here because of Miss Debbie,” Levins said.

It is unclear just how many books Wagenbach wrote, but only two were published. A third, titled “I Am Your Friend,” had been under consideration by another publisher for two years before it was rejected. The book is a religious one written in rhyme about the relationship between God and His flock.

“It was a shame she wasn’t published more,” said Levins, who had read most of Wagenbach’s books.

The two had known each other for quite some time, but it wasn’t until 2005 that they began to grow close.

“Debbie was ... she was one of the kindest, sweetest souls I have ever had the pleasure to know,” Levins said. “She was just good right down to her bones, had a very strong faith, which I’m sure is what has carried her through these past few years as she’s struggled with cancer, and I never heard her say a cross word about anyone. She didn’t complain, she was just always happy, not in a phony way but in a genuine way, like someone who knew what was important.”

Though Wagenbach always had a penchant for storytelling, it wasn’t until a little later in life that she discovered her calling.

Wagenbach was born in Burlington and graduated from Mediapolis High School. She began working for her parents, then at the Sunset Country and Western Store at the age of 18. She then worked for the city of Burlington as a meter maid before working for four years as a dispatcher for the Burlington Police Department. She enrolled in Southeastern Community College’s accounting program in 1979 and went on to work at City Hall as a payroll clerk before becoming a full-time receptionist and then a computer specialist, all of which were for the city.

It was in 1989 that an entry-level position at the library opened. It paid less than what she had been making, but she jumped on the opportunity nonetheless.

“I just had a stirring inside me, and I love working with kids,” Wagenbach told The Hawk Eye in 2016.

It wasn’t long before she moved to the children’s department, where she would inspire a love of reading in generations of children that would last them a lifetime.